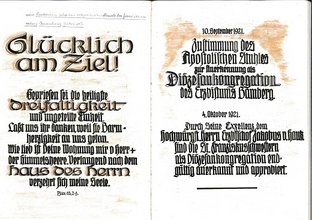 "1921 was a pivotal year in their history. Their community was recognised as a diocesan congregation of the Archdiocese of Bamberg and at the same time aggregated to the Franciscan Order. That both events fell in the same year was perhaps a coincidence. But I think they belong closely together, even if they point in different directions," said Provincial Fr Cornelius Bohl ofm at the ceremony.

The ecclesiastical recognition means that now they were finally an independent community. At the same time, spiritually they consciously joined the first Order of Friars Minor and thus the great Franciscan Family. The term "aggregation" has a common root with the Latin word "grex" - the flock. So they consciously wanted to travel in a larger group.

"What they are celebrating in their double jubilee belongs to each other like two sides of the same coin. This is true not only for then, but also for today. That is why the celebration is not only a historical memory, it is also a very topical message. Spiritual life is always about being independent in relationships and living one's own in union with others," the Provincial added. "Each sister and brother has a very personal vocation, and yet all are travelling as a `herd' and also have a common vocation.

We are united by the same charism, but each group has been allowed to live it in its own unique way throughout history. 100 years ago, they were aggregated into the Franciscan Order. In concrete terms, they have lived this relationship above all with the friars of the Bavarian and now the German Franciscan Province," Father Cornelius emphasised.

The ceremony was followed by greetings in the form of films from all the sisters of the convents from Germany, Peru and India. Sister Katharina gave an insight into the 100-year history.

Due to the Corona situation, the service was only held in a small circle and with a representation of the Solanus Sisters from Landshut. Sisters and invited persons as well as Sisters and Brothers of friendly congregations were connected via livestream. The design of the service was the result of an international collaboration. Individual elements were prepared by Sisters in Peru and India and repeatedly inserted so that they could then be seen on the screens and also in Vierzehnheiligen. The welcome dance from India was followed by words of greeting from the Superior General, Sister Regina Pröls.

In his sermon, the head pastor of Bamberg recalled the letter of St. Francis to the faithful throughout the world 800 years ago, in which he called for the renewal of love for Jesus Christ and for all people. Pope Francis, he said, took up this thought and desire with his encyclical "Fratelli tutti", referring to St Francis' 28 exhortations. "Both want to renew love for Jesus Christ and fraternity among themselves.

The Franciscan family has the mission to renew and spread this spirit," Schick said. "Love for Jesus Christ and fraternity are concrete. They are also the tools to find our way out of the crisis of our time and into a new future in which God's kingdom is more and more realised, the kingdom of justice, peace and joy for all people," the Bamberg head added. Referring to the Gospel of the day, Archbishop Schick called on people to put aside delusions of grandeur and arrogance in order to become children of God. Jesus' call to become like children should not be misunderstood, as has often happened in the course of history: "The superiors kept the inferiors small so that they themselves could stand tall and rule. The Archbishop emphasised, "When we become children by the example and following of Jesus Christ, then we are great children of God, able to live together as adult and equal brothers and sisters." If this spirit of St Francis spreads, more people would also become involved again in the various religious communities of the Franciscan community.

The Franciscan Sisters support donation projects for Peru (food parcels for the needy), Germany (the "Bread for the World" foundation of Archbishop Ludwig Schick and the Franciscan soup kitchen) and India (education for girls).

The Sisters of St. Francis have been ecclesiastically recognised as a Congregation for 100 years. Archbishop Jacobus von Hauck carried out the canonical confirmation of the Franciscan Sisters as a diocesan congregation with papal permission on 4 October 1921 and combined this with the wish "that they may work in a very beneficial way". With the recognition of the community by the Archdiocese of Bamberg, the seat of the Congregation leadership and the novitiate also came to Vierzehnheiligen.

Currently there are 134 sisters and novices living in ten convents in Germany, four convents in Peru and three convents in India. Here the Franciscan Sisters want to meet the problems of the time, the material, spiritual and pastoral need in Christian charity. They are committed to this goal in their professions, as a pharmacist, in nursing and care for the elderly, in work with the homeless, in kindergartens and schools.