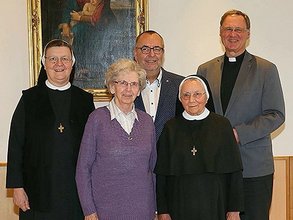 She received congratulations from the General Superior of the Congregation, Sister Regina, the sisters, as well as Mayor Jürgen Kohmann and City Pastor Georg Birkel from Bad Staffelstein. Of course, her sister Irene Daut from Allersberg also came to the Obermain for this special day. Sister Ruth was born as Theresia Löbel, the first of two sisters, in Dammfeld / district Glogau (now Poland) in Lower Silesia. In February 1945 this became a combat area and so she left Lower Silesia together with her mother Hedwig and sister Irene. After several months as refugees, the mother and her two daughters finally arrived in Upper Franconia and were quartered with the Schorn family in Serkendorf. Her father Alois had to stay in Glogau and was fatally injured. In October 1946, Theresia Löbel took on a job as a kitchen helper in the sanatorium Vierzehnheiligen (the mother's house was a sanatorium until August 1948), and it was here that she first made contact with the St. Francis Sisters. She was 19 years old when she entered the Congregation in 1949. This was followed by training as a needlework teacher in Würzburg / Oberzell and in 1950 Theresia Löbel passed her examination as a dressmaker in Paderborn. In 1952 she was admitted to the novitiate and clothed, in 1953 she made her perpetual profession. She started as a seamstress in the sewing room of the mother house before she worked at the sewing school in Sulzberg and Bad Abbach and the school for home economics in Obertrubach. "In 1958 I turned to Sister Helmtrudis, the Superior General at the time, with the request to be allowed to go Peru as a missionary," the birthday girl recalls. Sister Ruth adds: "In November 1959, after six months of preparation, I was sent to Peru with another sister.” From Amsterdam, a cargo ship took them to Lima. Sr. Ruth shared short anecdotes with her birthday guests about her crossing to Peru. On arrival in Lima, she was immediately assigned to the Order's own school "Santa Maria Goretti" because the number of children was constantly increasing and there was a shortage of teachers. Sr. Ruth, who in her free time is an enthusiastic Halma player, was also convent superior in "Santa Maria Goretti" and from 1986 to 1989 and from 1994 to 2003 superior in the newly built retreat house in Cieneguilla / Lima. From 2003 to 2008 she led the retreat house as director. At 78 after almost 50 years in Peru, in August 2008, she returned to Germany for health reasons. She then lived in the Motherhouse until 2017, helped in the sewing room and occasionally took over translation work. For three years now, the Motherhouse has been her "retirement home". To this day, the 90-year-old continues to take part in the life of the convent, is always around at both prayer and leisure time and occasionally still does translation work.