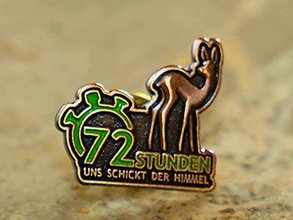 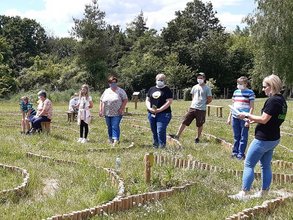 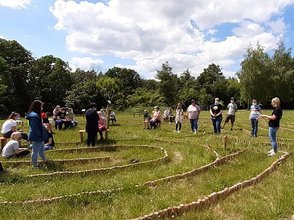 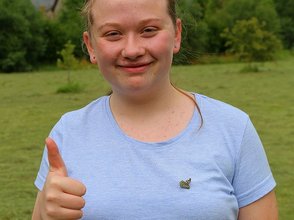 Last year, the television prize "Bambi" was presented to the participating children and young people of the 72-hour campaign. Now there were small Bambi badges for everyone.

"We're sent from heaven" - that was the motto of the "UFOS" the altar boys and girls from Uetzing, Frauendorf, Oberlangheim and Stublang, a year ago as part of the 72-hour campaign. Now the "UFOS" met again in Vierzehnheiligen at the place of their action. "For 72 hours together you have made the world a little better! All over Germany 160000 people got involved and you were a part of it. The projects took up political and social topics, you turned words into deeds and stood up for others. For this we were all awarded the coveted media prize "Bambi" in the category "Our Future"," explained Susanne Huber. The Bambi is a media and television prize that is awarded annually in Germany. Since 1984, there have also been awards in categories outside of film and television; since 2010, around two thirds of the awards have been presented in categories such as "social commitment", "fashion" or "Our Earth". At the end of the past year, the 72-hour campaign of the Federation of German Catholic Youth (BDKJ) was awarded the Bambi "Our Future". Four young people accepted the Bambi on behalf of TV presenter Thomas Gottschalk and Tagesschau spokeswoman Linda Zervakis. So that everyone has a part of the Bambi at home, Susanne Huber presented each participant with a Bambi badge as a thank you for their commitment. "We are pleased that the commitment shown during the 72-hour campaign is being carried on in so many different and varied ways during the current Corona Pandemic," explained Sister Katharina. In sweaty work, the "UFOS" processed a total of 4862 short and 78 long palisades over a length of 260 metres and created 13 benches from 26 seat boards. "In order to make the labyrinth accessible to as many users as possible and yet not to "seal" the meadow, we decided at that time, after consultation with the Bavarian State Ministry for Family, Labour and Social Affairs, to create a lawn area. Now wheelchair users can also use the labyrinth. For the blind, a board with a model for palpation was attached", explained Sister Katharina, the project manager at the time.