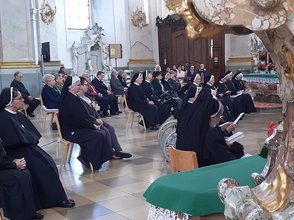 Eleven religious sisters recently renewed their professed vows in the pilgrimage basilica of Vierzehnheiligen. For this reason, Archbishop Ludwig Schick had come from the Domberg to the Holy Mountain in the "Garden of God on the Upper Main".

The Sisters and all those celebrating with them rejoiced over 60 and 65 years of living their yes to God, the community of the Sisters of St. Francis and the service of the Church. The Sisters, who are not so good on their feet any more, were carried up to the house of God in wheelchairs by Malteser forces. For them it was the first time in a long time that they were able to experience a service in the basilica: a special anniversary gift.

Superior General Sister Regina Pröls described the jubilee celebration, to which some family members of the eleven jubilarians had also travelled to Vierzehnheilgen, as "a celebration of thanks". The jubilarians were able to renew their vows, made at their profession many years ago, in a solemn service. Eleven beautiful candles made for the special occasion burned in front of the jubilarians as Archbishop Dr Ludwig Schick opened the festive service. The real "lights", however, are the eleven jubilarians themselves, if one considers, said Schick, how they have worked for decades in the various convents of the Congregation and numerous institutions for their fellow human beings.

In his sermon, Schick called on the elderly to direct their thoughts to the good and successful things in life. "In this way, gratitude is increased in us and understanding is also awakened for the difficult, the shortcomings, the frustration and the failures in life," said the head pastor of Bamberg, emphasising: "There is no greater grace in old age than grateful remembrance." Those who fixate on the disappointments and injuries in the course of life and their own shortcomings do not become grateful, but sad and pessimistic, he said. "Look at what has been successful in your life, what is beautiful and precious!" the Archbishop appealed to the Sisters. For him, Schick said, it is always a joy and enrichment to meet older people and listen to them when they talk about their lives in grateful remembrance.

Already in September, three Sisters celebrated their anniversary of profession in Bad Feilnbach. They gave thanks for 70, 65 and 60 years.