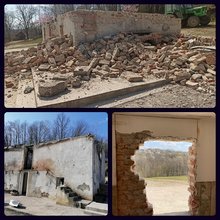 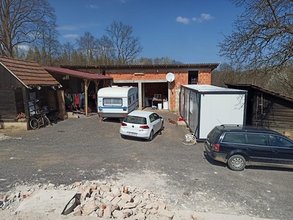 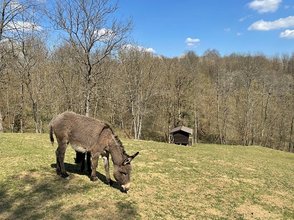 We have received several donations for earthquake relief from you. We have passed them on to Mia Liker, the director of our shelter in Croatia, to be given to families in need. She reports on the delivery:

I have never written before and if the circumstances were different, I would be a little afraid of this task, but this way I am completely free. With all my heart I want to write down this story and share it with you.

Last week Neven and I went to the small village in the hinterland of Glina, this place was hit hardest by the last earthquake. There we met this person who just a few months ago thought he had everything needed for happiness on earth. He is 38 years old, has loved only one woman all his life, they have four wonderful children together. His name is Jugoslav. A great person who now owns nothing.

He was waiting for us in his yard on the hill of his beautiful estate in the middle of a forest. Standing there, looking at the property that has been designed with so much love, you wouldn't believe that just a few metres away you would be seized by the greatest possible sadness.
Those who know Jugoslav or have only heard of him say only the best about him: "the soul of a man", "incredibly industrious", "starting from scratch, with his own hands and hard work, he created everything"...

Such a thing leaves no one indifferent, with his own hands he created his dream, day after day, year after year. In the unfortunate year 2021, which he says may never be repeated, his dream perished. His house took damage when the devastating earthquake happened, but there his dream still endured. Their house, built for years, was damaged, but not so badly that Jugoslav would have been entitled to any assistance. He said he would rebuild his house himself, that the aid would go to those more in need.

A few days later, it was 5 in the morning when Jugoslav got up to go to work, the wife had to go to the doctor, all four children were at school. Hours later, his wife called him to tell him their house was on fire. Since that day, they have returned to their house, which no longer exists.

For his business idea regarding ecotourism, he had been promised and transferred government subsidies. But the subsidies, along with everything they owned in life, turned to ashes. A few days before the fire, they had withdrawn the money from the bank and deposited it safely in their house.

Jugoslav found this part of his fate very difficult to cope with. A small glimmer of hope would have remained if the money had stayed in the account. All this would not have ended so tragically, because he also suffered a stroke because of this money, after all.

Yugoslav's physical abilities have been damaged and he tells us with tears in his eyes that he cannot live without work, but even that is not the very worst. He has lost his short-term memory.

From now until the end of his life, he will remember nothing he experienced with his children, his wife.... nothing will remain in his memory. In tears, he told me he was sorry because tomorrow he would probably not remember me, but he promised to look at the photos we took every day and he would read what he wrote about today. Because every day he writes down what he experienced together with his wife and then reads it the next day. This is how he lives from one day to the next. He re-reads his life every day, he is happy because he remembers life before that fateful day.

His wife and he now sleep in the small container, the four children in the camping trailer. What next? He does not know, but he does not lose hope. He says he will think of something as soon as he gets his strength back. He had big plans: renting out terraced houses to tourists, offering riding therapy for disabled children... With tears in his eyes, he looks at me and tells me about his love for the animals and when he approaches them, his eyes shine with love.

When we said goodbye, we hugged each other tightly, he had already forgotten the hug the next morning, but I will never forget it for the rest of my life.

Mrs. Liker has made a great effort to offer targeted help where it is needed. Two families have been supported with the donations so far. Mia Liker writes:

"As discussed, we have visited two families. I am sending the report on the first family, but I have not written anything about the second family, although the money has gone into good hands here too, to a family with two children. The family lost their house and despite their own misfortune they are now involved in helping others (they help financially and in kind, they even organised and helped to buy a house for another family of six). But because I was so moved to tears by the story of Jugoslav and his family, I felt the need to write down this sad story in the hope of perhaps helping others.
As my daughter likes to say, small hands are for comforting and helping. I thank you from the bottom of my heart that the hands of good people were able to comfort these sad lives."

The damage from the earthquake is still considerable. It will take a long time for people to rebuild and start again. If you would like to contribute to this, we would appreciate a donation to the following account: