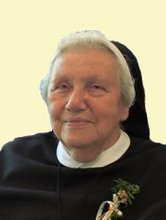 In the first hours of the new year, Sr Ruperta completed her earthly life. An obituary for a nurse with body and soul.

Shortly after making her First Profession in 1964, Sr Ruperta was appointed as a nurse in the Waldkrankenhaus. In 1970 she took over the management of a large internal oncology ward with about 50 beds. There she found her purpose in life, her fulfilment. She was far more than a competent nurse to the patients. With cordiality, warmth and empathy, she accompanied above all the seriously ill and dying, was a pastor, a companion for the dying, and a support and counsellor for the relatives. Her ability to listen, to sympathise and not to leave her side in hopeless situations gave support and comfort. The resulting relationships lasted a long time. Former patients sometimes came from far away to stay in contact with Sr Ruperta. Nurses and doctors learned from her. They gladly sought her advice when difficult decisions had to be made. Clear principles, strength of will, a wide heart and a sure sense for the right word at the right moment made Sr. Ruperta a rock in the surf to which many clung. In 1994 Sr Ruperta was awarded the Federal Cross of Merit on Ribbon for her "distinctive and impressive commitment".
At the end of 2001, Sr. Ruperta relinquished the leadership of the ward and remained in the background in a supportive capacity. In 2004, Sr. Ruperta withdrew completely from the ward. She spent her retirement in the Malteser Marienhospital in Erlangen.

R.I.P.
Requiem and funeral took place on 05 January 2023 in Vierzehnheiligen.