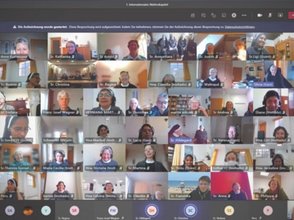 This sentence, enunciated at our leadership meeting on 19 January, hovered in the air for a few seconds. Then it ignited.

In January, Corona befell convents and institutions in Germany and Peru. The energy for an eight days intermediate chapter melted away. Cancel the entire meeting? The idea was discarded.

There were important issues to be dealt with, which had already been postponed because of cancellations due to Corona. We agreed to shorten the meeting - and to have a mat chapter! All sisters in Peru, India and Germany were invited to a virtual international meeting for four days - in view of time difference with a daily working time of four hours, under the motto "Life in abundance."

Our IT-experts got started instantaneous. The sisters were registered together with their PC data. PCs were upgraded, new ones bought, sisters trained and sisters without PCs invited to group rooms. Our IT-experts shook their heads sometimes - but still did their best to implement our idea. Even the facilitators, speakers and translators who had already been recruited in advance were re-informed, plans were redesigned and technical issues were checked. The first international test run on 13 February was very fascinating- three and a half weeks after the starting signal. And it went well! Bumpy though, with glitches, and a chat that was full with "I don't see anything!" "I can't hear anything!" "I can't get in!" With immense patience, every call for help was answered and questions were noted down for follow-up. The two facilitators were sweating: at least twice the preparation time was needed - measured against face-to-face events - to plan the processes well.

Then the time had come. From 19-22 February we met virtually: about 75 sisters in three continents on about 35 connected PCs. Already the introduction round with the "look at the mats" (all "volunteers" turned their PC around to show their own axis for a moment) showed the colourfulness and diversity.

The joy of seeing each other again was unstoppable. Our serious topics found space. In the "mat chapter" setting, the contents were presented "without hierarchy", discussed in small groups, quiet minutes were taken, and then collected in the plenary. A highlight was the holy mass on Sunday. In solidarity with our fellow sisters in Peru and India, who lived in strict quarantine for months, a live holy mass in the chapel in our convent in Lima was streamed to India and Germany - with the active participation of the sisters in all three countries. There was a sense of the common ground that sustains us, of the Word of God that speaks to us, grounds us anew and sends us out again.

During these four days, a connection grew, a new sense for each other, an amazement at how creative our sisters rise the Corona challenges. With concrete ideas for the future, newly networked and with much desire to repeat, we said goodbye to each other. "LIFE IN ABUNDANCE " - yes, that could be felt!