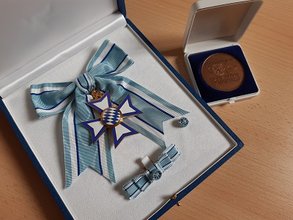 It is not every day that even a superiora general receives mail from the State Chancellery. This one contained the information that Sr Regina had received the Bavarian Order of Merit. ... But it did not remain alone.

It quickly became clear to her: "I can only accept such an order on behalf of all the Sisters and all the staff!"
And so it came about that Sr Regina travelled to Munich on 8 July 2021 to receive the Order from Prime Minister Markus Söder - quite corona-conform with distance, but much cordiality. The Prime Minister was able to give Sr Regina a message of "greetings from me to all the Sisters". This also underlined once more the deputy in which Sr Regina accepted this honour. After all, all efforts for the people are only possible because each Sister does (and has done) her service in her place.

A film about the award ceremony from the Bavarian State Chancellery (youtube-german).