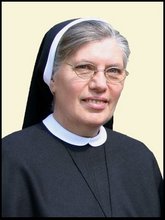 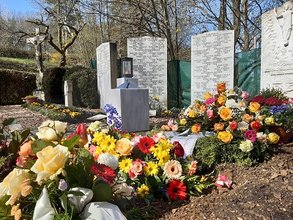 This saying by Alfred Delp carried Sr Christine through her life. An obituary.

Sr. M. Christine was born on 10.04.1946 in Obergreuth/District Bamberg as the first child of three siblings and baptised with the name Maria. At the age of 21 she followed her silent, long cherished inner wish: She asked for admission to the Franciscan Sisters of Vierzehnheiligen. Through her aunt, Sr. Godeberta Köberlein, she was familiar with the Franciscan Sisters; Franciscan values attracted her.

On 29.09.1969 Maria was clothed and received the name Sr M. Christine. She completed her training as a medical-technical assistant in Cologne-Hohenlind. After her examination in 1973, Sr. Christine took over the X-ray department of the Waldkrankenhaus St. Marien in Erlangen as head MTA and led it for 15 years. Sr. Christine was an all-rounder, convincing with her professional competence and cordiality, was there for the staff and above all for the patients, enlivened the convent with her unconventional ideas, initiated evening Bible studies and knew how to skilfully bring up points of criticism at the right time and in the right place.

At the 1988 General Chapter, Sr Christine was elected General Assistant and shortly afterwards appointed Superior of the Motherhouse Convent. It was a big change for her.

That Sr. Christine was elected Superior General at the General Chapter in 2000 was probably the greatest surprise to her. Entirely trusting in the power and grace of God and the support of her fellow Sisters, she accepted the office. Sr. Christine grew with her tasks. Quickly, unconventionally, effectively and courageously, she turned her attention to the projects at hand and those already started, and especially to the people. Re-election in 2006 was the logical consequence. What Sr. Christine initiated, accompanied, shouldered and shaped during her twelve years in office is immense: in addition to the main task of enabling the Sisters to lead a good spiritual life, there were building projects, work on the mission statement, changes in the legal form, supervisory board activities, quality management, convent openings and closures, new foundations in India and in Croatia with the establishment of congregation-owned facilities and religious education in India, the beginning of the revision of our Constitutions and much more.

Although Sr Christine, in her modest, reserved manner, in no way aimed at or even expected an external impact, she was soon invited to join public bodies: the extended board of the German Catholic Missionary Council (DKMR) and the newly founded Women's Commission of the Archdiocese of Bamberg. Nationally, her achievements were recognised in 2008 with the Silver Medal of Honour of the District of Upper Franconia, in 2011 with the Bonifatius Medal by Archbishop Dr Ludwig Schick and in 2014 with the Bavarian Order of Merit by Interior Minister Horst Seehofer.

In everything, Sr Christine kept a heart for everything created, cared for plants and was fascinated by both the macrocosm and the microcosm. "Enabling life - promoting life - protecting life", this basic attitude ran through all her activities. Coupled with an unshakeable hope and a firm faith, she pursued her goals consistently and surprised again and again with courageous innovations. At the same time, she herself remained modest, open to those in need and sensitive to people's needs, and she was completely selflessly there for everyone else.
After her conscious departure as Superior general, she helped out in India for six months and in 2013 found her new place in the Marienhospital in Erlangen. But after a few weeks she suffered a stroke. With tenacious energy, she fought her way back into life, was mobile again and was able to carry out her tasks on a smaller scale.

In June 2017, Sr. Christine came to the nursing station in the Motherhouse in Vierzehnheiligen. Sr. Christine was mobile in a wheelchair until January 2021. She took part in the life of the convent and remained interested in all that was going on in the community, in the church and in the world. She enjoyed visits and kept contacts alive at home and abroad by letter and telephone. She suffered greatly from her failing eyesight and from the fact that her mind was wide awake, her will unbroken, but her body weakened and her mobility decreased more and more.

After another decline in health in February 2021, Sr. Christine did not recover. She was conscious of her 75th birthday, had every letter read to her and expressed her joy and gratitude with her facial expressions. Slowly but steadily, spirit and soul said goodbye to this earth, to all heaviness, to all suffering. The morning of 17 April, just as an Easter hymn sounded in the chapel and her sister Claudia was also with her, for Sr Christine was the beginning of an Easter morning that knows no more evening.

Requiem and funeral took place on 21 April 2021 in Vierzehnheiligen.

People express their grief, gratitude and sympathy in person, in writing and also through incoming donations. We thank all those who have given us a token of their esteem for our Sister Christine.

In her spirit we are collecting donations for our projects in Peru, India and Croatia.
Account of the Franciscan Sisters
IBAN: DE 87 7509 0300 0009 0085 00
Liga Bamberg
password "Sr. Christine Köberlein"