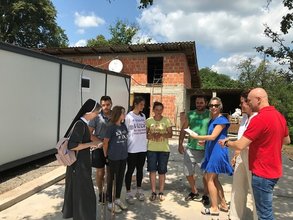 An encouraging report from Sr. Martina from Croatia on the progress of our earthquake relief.

28 December 2020: Two major earthquakes within 30 hours south of Zagreb destroyed several villages. We started a relief campaign. Part of the donations received went to Jugoslav and his family in April 2021. At that time, he had not only lost his house, but also his fortune - and his health. A stroke wiped out his memory. Mrs Liker, our home manager, reported a touching meeting in May 2021.
After that, donations were received again. During our working stay in Croatia in mid-July, a day was kept free for a meeting with Jugoslav and his family.

There were five of us: Mia Liker and four members of the Board of Directors. After two hours by car to the south-east of Zagreb along the Una, the border river to Bosnia, we turn off. The last villages look poor. The bullet holes from the war against Croatia in the 90s are still visible on many houses. The rubble from the earthquake damage of December 2020 has only been partially cleared away. The path becomes narrow and impassable, has potholes and leads upwards until we stand on a hill surrounded by forests - the estate of Jugoslav. He is already waiting for us, smiling a little sheepishly. His wife and children also meet us. The welcome is warm. Jugoslav proudly shows us what has been done since April: the area is tidy. Next to the burnt house, the floor behind the living container has been concreted - the foundation for the new house.  Metal pins on the ground outline where the walls of the new building will go up. He does all this alone with his family. The children, a boy and three girls between 11 and 17, are on holiday and help out. By the onset of winter, one storey will be raised and the roof will be finished. We ask how he lives. He receives 3500,-- Kuna sickness benefit, he says (about 500,-- €), and his wife works in a butcher's shop. That must be enough. Jugoslav is not yet fit for work.

While we walk to the game reserve, Mia Liker tells me how hard Jugoslav and his wife Milka have worked so that Jugoslav can find his way back into life. Milka wrote down every day what the day brought - and read it to Jugoslav the next day. Very slowly, he is now able to remember what he experienced. His physical strength is gradually returning. Jugoslav still has emotional disturbances and writing is difficult for him. Nevertheless, he pursues his plan with incredible tenacity, not only to rebuild his house, but also to realise his dream: Building small log cabins on the hill for people with disabled children. The donkeys and sheep in the nearby forest - already purchased before the earthquake - will be therapy animals, and he wants to give the high-quality donkey milk obtained then to the parents for the children. The EU office is involved again - his eco-project has a good chance of being approved in the second attempt.

After the handing over of the donation, we are invited to a delicious meal - with products from home and farm, of course. We tell Jugoslav how much we admire his will to survive. "Never give up," he says, "never..." and smiles again.

We are thoughtful as we drive back. We have the victims of the flood disaster in Germany in our minds - and the images of the helpers who are spontaneously on hand. People are survivors. And that they are good at heart is shown in emergencies and disasters, here and at home and everywhere. Jugoslav also has the good fortune of a smart, loving wife and four children - and he has you, the donors, who give unselfishly to people they don't know.
WE SAY THANK YOU! 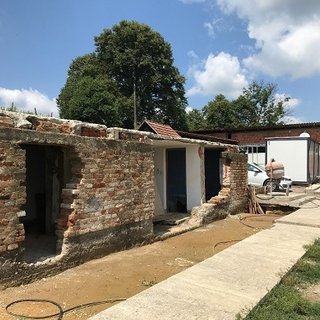 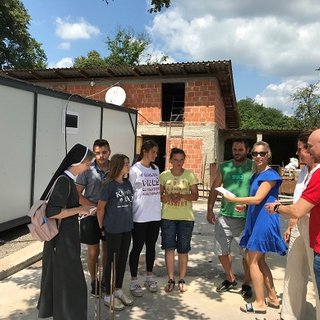 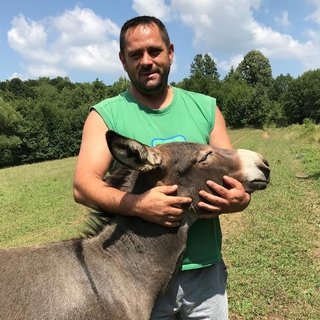 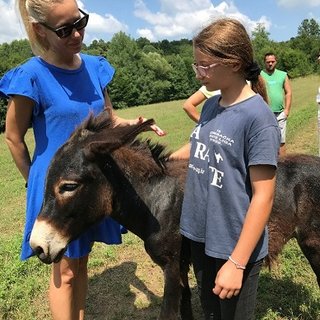